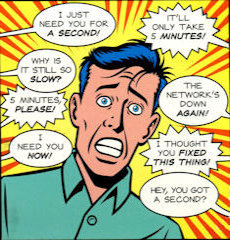 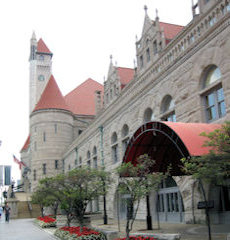 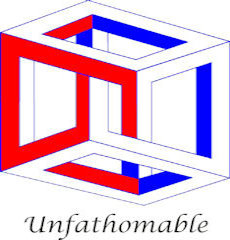 The WPA Guide to 1930s Missouri

The primarily textual history of Missouri written by impoverished clients of the (Federal) Work Projects Administration during the 1930s economic depression.

Life on the Mississippi

Life on the Mississippi is an adult's book, a mixture of midwestern charm and southern comfort. From Chapter 22:

"The first time I ever saw St. Louis I could have bought it for six million dollars, and it was the mistake of my life that I did not do it. It was bitter now to look abroad over this domed and steepled metropolis, this solid expanse of bricks and mortar stretching away on every hand into dim, measure-defying distances, and remember that I had allowed that opportunity to go by. Why I should have allowed it to go by seems, of course, foolish and inexplicable to-day, at a first glance; yet there were reasons at the time to justify this course. I was young and heedless, and naturally more given to pleasure-seeking than to providing for the future; it was impossible to foresee that out of that smutty village would grow the imperial city of to-day; and besides, I had only thirty-five dollars, anyway. Still, if I had known then what I know now, I would have borrowed."

"There ain't any accounting for it, except that if you send a damned fool to St. Louis, and you don't tell them he's a damned fool, they'll never find it out. There's one thing sure - if I had a damned fool I should know what to do with him: ship him to St. Louis - it's the noblest market in the world for that kind of property. Well, when you come to look at it all around, and chew at it and think it over, don't it just bang anything you ever heard of?"

These 24 postcards are photographs of old Saint Louis.

Henry Shaw: His Life and Legacies
A Gift To Glory In: The First Hundred Years of the Missouri Botanical Garden (1859-1959)

Henry Shaw: His Life and Legacies is the c1987 primarily textual biography of a Saint Louis major benefactor, a hardware merchant who developed and then gave the city both a botanical garden (Shaw's Garden) and also 276 acre arboreal Tower Grove Park. A Gift To Glory In: The First Hundred Years of the Missouri Botanical Garden (1859-1959) is the c1989 primarily textual history of the Missouri Botanical Garden (Shaw's Garden) and of Tower Grove Park.

A World Of Plants: The Missouri Botanical Garden

The Autobiography of Malcolm X

by Malcolm X as told to Alex Haley

A c1980 novel about grubbing for sustenance after eastern Missouri society goes renegade. Thornburg's c1973 novel To Die In California depicts an Alton Illinois farmer investigating why his vacationing son died in California. And Thornburg's c1978 novel Black Angus mirrors life in The Great Recession's Wake: a former Saint Louis account executive struggles to save his new life and to save his Ozark plateau cattle ranch from bankruptcy.

The c1982 memoir of a Columbia Missouri man who circumnavigates the continental United States by van, and learns about people and himself.

The c1988 memoir of a Kirkwood Missouri man who canoes from the Mississippi River's headwaters to New Orleans and learns about himself.

Viets' Guide to Sex, Travel and Anything Else That Will Sell This Book

The Mole People: Life In The Tunnels Beneath New York City [1993]
Orphans of the Living: Stories of America's Children in Foster Care [1997]

I include investigative journalist Jennifer Toth's books on this webpage because Ms. Toth attended Washington University in Saint Louis before beginning her graduate studies at New York City's Columbia University. Ms. Toth's books are extremely well-researched and well-written, and IMO are relevant to Saint Louis: downtown Saint Louis has its own MetroLink tunnels and multiblock steam tunnel system, and the Saint Louis metropolitan area IMO has its own foster care social service difficulties.

Jazz on the River

Author William Howland Kenney's c2005 scholarly book addresses a big subject: the evolution of jazz along the Mississippi and Ohio Rivers. Saint Louis plays a pivotal role because Saint Louis-based Streckfus Steamers, Inc. spread riverboat jazz throughout the river valley and also provided reliable employment possibilities for aspiring musicians. As the railroads siphoned cargo traffic from packet boats, the Streckfus family purchased unprofitable packet boats and converted them to excursion boats, complete with chair-filled upper decks from which to watch the river pass, and with live bands and with wooden large dance floors where passengers could dance to hot dance music. Streckfus' riverboat jazz was New Orleans jazz detempoed to a cadence suitable for genteel dancing, with an occasional waltz added for good measure. The excursion boats provided passengers with a four-hour-long visit to Mark Twain's romantic river kingdom.

For decades Fate Marable led the most famous of the Streckfus hot dance bands, developing musical skills and professionalism within his musical hires. His growing reputation helped Marable locate the best river city musicians, and he taught them the expectations of riverboat jazz performance, including the ability to sight-read sheet music. The Streckfus riverboats served as a school and stepping stone for many jazz musicians, but the curriculum sometimes was controversial. Louis Armstrong played three years on Streckfus steamboats before moving on to Chicago, but Louis Armstrong resisted learning to sight-read sheet music because he believed that sight-reading would hobble his improvisations. Author Kenney also discusses the career of cornetist Bix Beiderbecke of Davenport Iowa, the career of pianist Jess Stacy of Cape Girardeau Missouri, and depicts the music cultures in Memphis Tennessee and in Cincinnati Ohio. Author Kenney attributes the maturation of jazz piano to Pittsburgh Pennsylvania.

Dennis Owlsley's City Of Gabriels discusses Metro East music club history but says little about Metro East today. River cities are predictable: polite society lives on one side of the river; the other side of the river is industrial, lacks a strong tax base, and often welcomes businesses shunned elsewhere. These shunned businesses generate dependable revenue that can be reinvested on either side of the river. Gambling came to Saint Louis Missouri with the Casino Queen when East Saint Louis Illinois was revenue-starved; Metro East smaller cities (Sauget, Brooklyn, Washington Park and Centreville Illinois) fund themselves by taxing strip clubs. Scott Eden's essay is the best overview discussing the Metro East sporting life that I have found.

A c2002 history of the University City Loop business district and its attractions, plus a 21st Century picture of its merchants and their favorite recipes. The recently constructed Loop Trolley running between the Loop's west end and the Saint Louis History Museum in Forest Park is an unpublished postscript to this volume.

The all purpose cookbook. Ms. Rombauer and her daughter were long-time Saint Louis residents.

A Taste of the Hill: Our Favorite Recipes

presented by the Friends of St. Ambrose Parish

presented by the Junior League of St. Louis

Meet Me In St. Louis

This is Steve McQueen's second film appearance (after The Blob; his performance is not comparable to James Dean). The best part of this crudely acted 1959 film is its setting in the south Kingshighway neighborhood.

Director John Carpenter filmed scenes for this 1981 film in Saint Louis's Fox Theatre, on the Chain of Rocks Bridge and inside Union Station's Great Hall before its renovation. The production company thought that Saint Louis looked like Manhattan Island after being overrun by penitentiary inmates -- quite a difference.

This 1983 comedy film includes aerial views of the Gateway Arch and the Saint Louis riverfront, plus an unplanned excursion into a north Saint Louis urban neighborhood.

King Of The Hill

I am not familiar with Saint Louisian A. E. Hotchner's memoirs, but the 103 minute VHS film version contains no clue to the film title King Of The Hill. [The hill depicted in the runaway car sequence IMO exists nowhere in Saint Louis (City).] Nevertheless, screenwriter / director Steven Soderbergh's 1993 well-made film highlights midtown Saint Louis good architecture as it depicts two brothers growing up in 1933 Depression-era Saint Louis. The film's ambience is everything either is disappointing or is scary. This film IMO is relevant to the coronavirus era: the brothers must maintain proper social distancing from their mother because she is a a patient in a tuberculosis sanitarium, while the only work their father can find is as an itinerant salesman in Iowa.

Director George Hickenlooper's 1999 R-rated film, based upon an Orson Welles screenplay, is an angst-ridden political drama exploring a Missouri gubernatorial candidate's dark past. The Saint Louis riverfront and other Saint Louis area landmarks are interwoven into the film's intrigue.

Historically illustrated with paintings by Missouri artist Thomas Hart Benton, this 2000 video is an introduction to Henry Shaw, an English businessman who was drawn to frontier Saint Louis, who sold hardware (ironworks) to westbound settlers, who made a fortune early in life, and who decided he had sufficient wealth to spend the rest of his life indulging his passion for botany and formal gardens. The video concentrates on Henry Shaw's legacy: the scientific but beautiful Missouri Botanical Garden; the adjacent Tower Grove Park; and the adjacent residentially-affordable Shaw Neighborhood. Saint Louisians consider these institutions just another part of the Saint Louis landscape, but Saint Louisians forget that elsewhere (e.g., around NYC's Central Park) people pay premium prices to live within a green environment. The video highlights Henry Shaw's 21st Century legacy: a world-class botanical research institution situated within a beautifully green setting. Readers seeking additional detail about Henry Shaw's life should consult Henry Shaw: His Life and Legacies.

This 2001 History Channel program on DVD discusses the challenges that were overcome in the Saint Louis Arch's conceptualization, design and construction. Laced with photography and movie cuts, the program features people who participated in building the Arch.

The Saint Louis Arch is awesome upon initial viewing, but thereafter Saint Louisians consider the Arch just another part of their urban environment. This DVD explains the incredible effort that produced a one-of-a-kind monument: acquiring the site took decades; architect Eero Saarinen (who died before the Arch was constructed) produced a visionary design within a postwar monumental competition; Saint Louis construction engineers developed new technology allowing Saarinen's vision to be built; and Saint Louis construction workers built the Arch under pre-OSHA conditions without incurring fatalities. One interviewee muses that building the Arch under today's OSHA safety regulations might be impossible; that's another reason to appreciate this monumental gem sitting on Saint Louis's riverfront.

When the Fabulous Fox Theater halted productions due to 2020 coronavirus concerns, they provided this YouTube 4K video to remind Saint Louisians about their in-town theater gem and We'll be back!